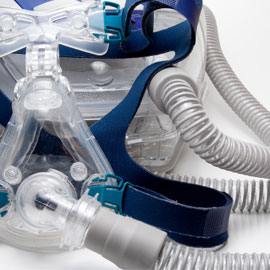 Difficulty sleeping, loud snoring, excessive sleepiness during the day—these are a few of the signs of the chronic sleeping disorder called obstructive sleep apnea.

When someone has sleep apnea, their breathing repeatedly slows or stops as they sleep throughout the night. The most common form of sleep apnea is called obstructive sleep apnea. It develops when the airway becomes blocked, preventing the free flow of air into the lungs. Being overweight or obese increases your risk of developing this condition. If not addressed, sleep apnea can have a significant influence on your health and quality of life. 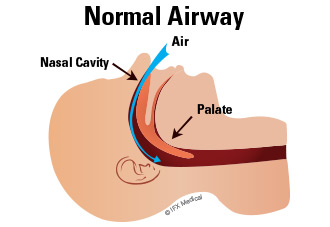 In a healthy individual, air travels freely through the airway into the lungs.

Obstructive sleep apnea develops when the build-up of fat or tissue in the neck creates a blockage in the airway.

As healthy individuals sleep, they inhale through either their nose or mouth until air reaches their lungs, and then they exhale. For individuals who have sleep apnea, air cannot freely pass it to reach the lungs, causing breathing to stop.

These brief periods of breathing cessation can last anywhere from a few seconds to a minute or more. Though 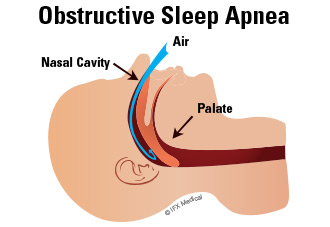 brief, the disruptions can occur frequently throughout the night. Loss of oxygen to the brain will shift you from deep sleep to light sleep, which will disrupt your rest pattern and may cause you to feel fatigued during the day.

Signs and Symptoms of sleep apnea include:

Many people with sleep apnea develop a form of insomnia that is marked by the inability to stay asleep throughout the night. However, the brief stops in breathing do not always wake everyone up. It is common for someone to have sleep apnea and not be aware of the condition until a loved one comments on their strange snoring sounds during the night.

Sleep apnea is typically treated through a combination of lifestyle changes, medical therapy and in severe cases surgical intervention.

The leading form of treatment for sleep apnea is with a nighttime breathing device called a continuous positive air pressure (CPAP) machine. This machine fits snuggly over the nose and mouth. As you sleep, it directs a gentle stream of air through your airway, helping it to remain open and allowing you to sleep soundly—without any interruptions in your breathing.

Losing weight often helps to reduce the severity of sleep apnea. Many people experience an improvement in their sleep apnea after losing as little as ten percent of their excess body weight.

Delight Medical was featured within press releases on the websites of