Home » Healthy Eating » This is Your Body on Fast Food

This is Your Body on Fast Food 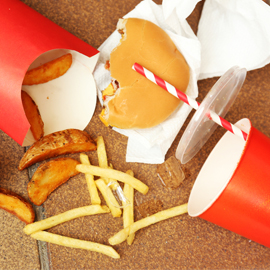 The fast food industry has taken over in the United States. In 2012, the International Food Information Council conducted a survey of American eating habits. They found that no less than one in every four American adults eat fast food at least once a day. What is more, they found that more than half of Americans, 52% to be exact, find doing their taxes to be less confusing than figuring out how to eat a healthy diet.

Fast food restaurants have capitalized off of that confusion and have taken advantage of our poor eating habits by getting us hooked on the highly processed, high-fat, high sugar foods as kids. Keeping the menu items super cheap helps too. Eating at fast food restaurants is among the most inexpensive ways to fill up daily throughout Los Angeles, as it is across the country.

The Problem with Fast Food

Not many people are under the misperception that eating at fast food restaurants is healthy. Even the items on the menu that boast the highly subjective terms “healthier” or “reduced fat” can lead you far astray, as they are simply comparing the items to others that are even worse for you. But despite this, so many people flock back to the counter and order up fast food for themselves and their families.

This is one lessen that you will learn quickly during your medical weight loss program. Eating fast-food has well-known long term consequences. The fattening burgers, buns, cheese and fries are not part of any healthy dietary plan, let alone one that is aimed at helping you to lose weight. The more you eat fast food the more you will find the greasy value meals plastered to your stomach, butt and thighs.

However, the problems with fast food are much more than cosmetic. Eating a diet rich in fat and sugar, like most items found at fast food restaurants, will increase your risk for diabetes and heart disease. In fact, one study published by the Canadian Journal of Cardiology found that your risk for artery damage increases after having just one standard over-sized fast food meal. The health consequences evaluated in this study were not found after prolonged exposure to fast food, but instead were detected immediately following the consumption of one fast food meal. Specifically, researchers found that indulging in fast food reduces the ability of your blood vessels to dilate, which increases your risk for heart disease and stroke.

This means a number of things for the junk-food-junkie. Firstly, that there is no such thing as it being “okay” to eat fast food in moderation. With heart damage developing after just one meal, you can reduce your risk of developing diseases by cutting down your intake of fast food, but not by nearly as much as cutting out the dining category altogether.

The next time you are tempted to grab fast food while rationalizing that you’ll make up for it later, remind yourself that the damage to your health starts immediately, so later won’t be soon enough.