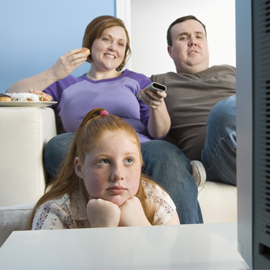 Peer pressure has been a scapegoat for many things in life, but a recent study published in a large periodical confirmed that there is a measurable effect on certain consumers when they are exposed to individuals, or more precisely pictures of individuals who are overweight.

Weight loss is an ongoing struggle throughout the country and now two studies are confirming that actually being around others who are overweight may lead to poor nutritional decisions. Studies conducted showed that respondents who were shown pictures of a lamp, a fit person and an overweight person were likely to make different choices when rewarded for their participation in surveys. When completing the survey participants were offered candy from a bowl. The individuals who were shown pictures of overweight people in the survey were more likely to reward their own participation with a larger amount of candy.

In a similar taste test survey, participants shown a similar picture were more likely to taste test more cookies before making a decision. Researchers in these studies concluded that even when people have goals to lose weight through diet or medical weight loss their goals need to be consciously reinforced to remain viable. Researchers also found that healthy people who are aware of the risks of candy and cookies are more tempted to cross the line and indulge in the snacks.

Exposure to people with bad eating habits or weight issues led to what researchers called a ‘negative stereotype’. Instead of having their goals reinforced, the participants were more likely to take part in the behavior that actually caused the weight gain.

Additionally researchers concluded that to continue through with their goals, people need to think about those goals and how they actually plan on achieving them and remove the temptation to indulge in poor eating habits. The study results prove that weight loss and even maintaining weight loss is an ongoing journey that requires dedication to reach success.